My father was a Professor of Horticulture, but I have a black thumb. My family jokes about my keen ability to kill plants, flowers, and sometimes shrubs. It always ends the same way with me saying: “I just don’t know what happened.”

The innocent plant was fine one day, and then suddenly it wasn’t.

Plants are not really all that complicated. They require water, and a certain amount of sunlight. Somehow, I mange to screw this up, either by over watering, or by under watering, or by allowing too much sun, or too little. So maybe for me, it is not so simple after all. I have had moderate success with a few cactus. But any houseplant unlucky enough, to come and live with me, does not do so for long.

I believe that the quality I lack, and that most plant lovers possess, is patience. You cannot hurry nature. Nature moves at it’s own pace.

A friend of mine grows Orchids. For years I had been in awe of her amazing green thumb, and certain that these exquisite, delicate flowers, were surely beyond the limited nurturing capability of someone like me. Then, a coworker, (who obviously did not know me well), gave me an Orchid as a gift.

I panicked! I tried to give it away, but there were no takers. Then, I read the instructions. I was careful. I treated the flower like the fragile thing I believed it to be. I was diligent. Attentive. Patient.

And it bloomed! Even better it remained in bloom for weeks. I could not believe how simple it was to care for.  I gave it ice cubes, not water. I let it sit in a sunny window. Sometimes, I forgot the ice cubes. This was wintertime, so sometimes the sun stayed away for days. Still, it bloomed! Such a remarkable plant, I thought, that blooms at random times of the year.

And then, one day, this happened:

One at a time, the flowers went limp and fell to the floor. I had murdered the beautiful foliage, after all.

I was saddened, but did not have the heart to throw it away. This once living thing had brought me such joy! I let it sit in a corner, on the windowsill. I dropped an ice cube into the pot whenever the spirit moved me. I went on to kill other plants, like Poinsettias, and Easter Lily’s.

Several months later, something miraculous happened. It bloomed! I had brought it back to life…or at least nature had. My new discovery: Orchids go dormant, and then they have a blooming phase. This cycle continues as long as you take care of the plant.

Do not let anyone fool you, if I can grow Orchids, anyone can!

Here are some great resources should you decide to grow an Orchid of your own:

How to Care for Orchids

How to Trigger Reblooming of Your Orchid

Thanks for reading, and keep writing! 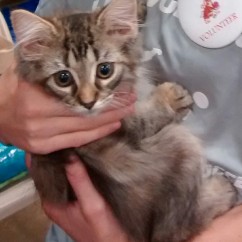 My daughter and I have been volunteering with HART pet adoption for the last few weeks. It is great fun and the best part is, I get my “kitten therapy”! In between, I am missing these having these little guys in my arms. So sweet! Check out HART (a no kill shelter) if you are interested in adoption, fostering or volunteering.